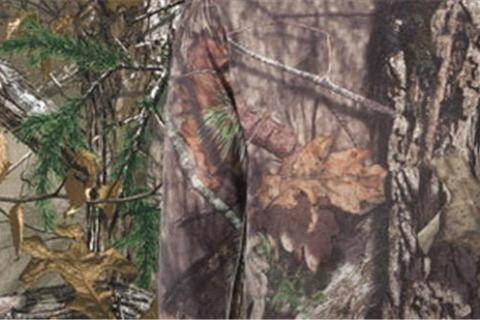 You’ve heard the old saying “…the clothes make the man … or woman”? Well, for many hunting and fishing types, it’s the CAMO that makes the man … or woman! Most people may not even realize these 42 items come in camouflage, but it you’re truly hooked on the camo lifestyle, you laugh at those people.  Now fess up; how many of these items do you already own?

We've gathered some pretty interesting camo things and provided links to the website where you can get more details. You can also view photos in the 42 camo things gallery here.

1. Camo Wrapping Papper: The CB Outdoor 5-Pack Camouflage Wrapping Paper Assortment brings the outdoors inside to dress up your gifts.

6. Camo Sunglasses: The Costa® Cortez 580P Camo Polarized Sunglasses are lightweight and tough enough to explore any body of water.

8. Camo Toybox: Keep toys, books, and games out of sight with this Camo Toy Box!

15. Camo Ear Buds: fuse® Realtree® Camo Budz Ear Buds enables you to listen to music or programs on your phone or MP3 Player when you're on the move.

16. Camo Sandals: Taking the cool, breathable comfort of an open-toed slide sandal to the next level, Under Armour® Mavrix Camo SL Slide Sandals make a great choice when temperatures soar.

24. Camo Bible Cover: This New King James Version® of the Holy Bible has a green camo, cloth cover that adventurous kids, active in the outdoors, will be proud to carry.

28. Camo Camp Stove: Enjoy your outdoor adventures even more with the Camo Flash Cooking System from Jetboil®. This compact, all-in-one camp stove design combines the burner and cooking vessel in one easy-to-use unit.

30 Camo Case for iPhone 6 or 6s: Your hunting trip might require a photo or a relayed text or call. Why not give your cell phone the same cover you give other gear? The Nite Ize® Connect Case for iPhone 6 Plus is your solution for keeping all gear in perfect cover—or just showing your outdoor style.

32. Camo Rope: Bass Pro Shops'® Multipurpose Camo Rope is strong and ideal for a wide range of applications, from base camp to blinds, from tree stands to tents, and everything in between.

35. Camo Trampoline: The Skywalker Trampolines® Camo 12' Round Trampoline with Enclosure provides hours highflying fun for kids and kids at heart.

8 Steps to Prepare & Store Your Guns in a Gun Safe

Simple and Delicious Summer Recipes for Game and Fish

The 5 Best Types of Bait for Catching Catfish

What You Should Know About Ticks and Lyme Disease

The Bass Pro Shops 1Source site has a goal to provide outdoor industry content that is informational, tells where-to and how-to, presents views and opinions from outdoor writers as well as fishing and hunting professionals including many recreational and industry experts.

We hope you enjoy our fishing, boating, hunting and camping videos, tips, and news and…