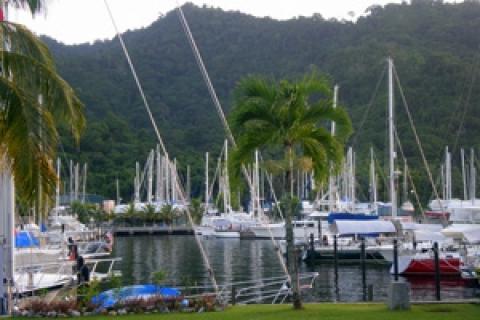 Since the launch of the Trinidad Tarpon Bash a few years ago, I felt a keen desire to fish for the silver king on this exotic island. The Bash itself lived a short life and was taken over by island locals to be renamed Tarpon Thunder.

My research indicated that August was the peak month and it took about a year to get all the wheels in place and rolling. All during that period, I was amused by my curious plight as a traveling angler: even though I had plenty of tarpon barely 10 minutes from my front door, I was more than ready to travel to the coast of South America for the very same fish but in a habitat of lush green mountains rising out of waters as deep as 150 feet. 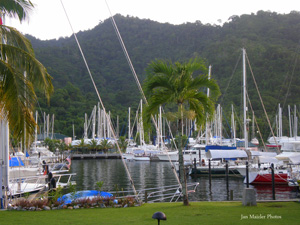 Same fish, different land on an island featuring one of the richest cultural mixes in the Caribbean and the birthplace of Carnival and calypso — I was sold!

I called best friend and photographer Art Blank with this travel proposition and he readily accepted. Art has long been under the influence of the traveler’s muse. He also has established the reputation for eating many local indigenous foods, which seemed to get more exotic the hungrier he got. One quick glimpse into the future of this trip saw Art happily swilling down cow hoof soup under the guidance of host Elton Pouche at a trendy nighttime Port-of-Spain eatery.

Art and I booked our tickets months in advance and after many fishing trips and for me, many fishing stories, we were finally boarding the flight for Trinidad at the Miami International Airport. After finding a mechanical problem on the plane — thankfully before takeoff — the airlines kept us onboard for two hours before concluding we would need a replacement plane. When we de-boarded, the airlines gave about 250 of us lunch vouchers for use on the concourse. Better safe than sorry, with gate changes, baggage and plane changes, it took an additional 5 hours before we took off from Miami to Trinidad. The flight was smooth and the pilot and the crew was friendly.

The operators of In Joy Tours in Trinidad — Lorraine and Elton Pouchet — made the trip wonderful. They had our driver waiting for us with a hand-held sign at the airport when we arrived.

Out trip took us from the airport through Port-of-Spain up to the northwest point of the island at Point Gourde, Chaguaramas. Not only was this close to the tarpon fishery; it was also the site of the Crew Inn and Yachting Center, which would serve as our lodgings and base of operations.

We quickly turned in for the night since we had to meet our guide, Captain Danny Agostini in just eight hours for the morning shift of tarpon fishing at 6 a.m.

The Fishery and Habitat

The area we fished was the northwest point of this huge island. It is barely a half-hours run to the west from the Crews Inn. The specific stretch of tarpon fishing were three passes or Bocas that are split up by large green mountains that rise out of the Caribbean Sea: this is where the fish roll. It is thought that the fish are coming from nearby Venezuela's summer season rain-swollen rivers on their way to Grenada. Though this has not been proven scientifically or completely, the fish do show up around august and one tarpon tagged in Trinidad was indeed caught in a Grenada to the north.

Because the Boca waters depth ran from 40 to 150 feet deep, fly tackle proved unrealistic. Therefore, we settled on standup conventional and spinning gear in the 20-pound class, which would also result in a quicker release time than the long rod in such deep water. Since these tarpon generally range from 40 to 100 pounds, 20-pound class tackle generally would prove adequate to put really significant pressure on the fish.

Threadfin sardine schools — locally known as Joshua Fish — were commonly observed on the 30-minute run from the Crew Inn where we stayed to the Boca de Huevo. These were the live baits that we used. Indeed, Danny would have the livewell loaded with these frisky baitfish. We were to learn that the standard practice was to fish these baits on an 80-pound fluorocarbon leader and 6/0 circle hook.

Since the tarpon bite was early morning and late afternoon into evening, the fishing would be divided into two daily shifts with a midday break. As to the weather, mornings were generally clear and flat calm while the afternoons had some showers and an occasional thunderstorm in the presence of a sea breeze — this was similar to the weather in Florida.

Danny picked us up promptly the next morning barely a hundred feet from our rooms at Crews Inn. His rig was impressive and featured a 25-foot long pirogue-style center console vessel powered by twin 90hp Yamahas.

Our run to the west seemed like mere minutes and soon we were slowing down in the famed Bocas. Danny pointed to the 12 0’ clock position off the bow and said, “look over there.” We immediately saw some medium-sized tarpon rolling. Indeed, once we eased our live baits over into the deep waters and swirling current of the Boca, we could see tarpon rolling in all directions. They seemed to range from 40 to 100 pounds.

Like tarpon everywhere, many rolling tarpon may not mean striking tarpon and for the first hour this was indeed the case, seemingly, for all the boats fishing around us. In the next hour, I had a runoff, flipped the lever, and reeled until the rod took a deep bend. Since I was using a circle hook, striking the fish would be counterproductive. After a half-hour battle we released a nice 50-pound specimen. It was a thrill to catch this fish, as the habitat of tall green mountains was more pleasing than the flat mangrove brackish rivers, bays and beaches of Florida, The Yucatan, Belize, or Costa Rica’s jungle Tortuguero Coast.

The rest of the morning session was quiet even though the fish continued to roll. In the afternoon session, Art and I had very light runoffs that Danny concluded were nuisance fish. On our final session, which was the be the morning of the second day, the entire fleet went without a strike, or so the radio and cell phone chatter seemed to indicate. I was glad to have released that fish on morning number one. We surely knew this was the nature of fishing everywhere and this did nothing to dampen the pleasures of Trinidad.

In Joy Tours handled some wonderful excursions for us. The first experience took us far into the interior of the island and way up into the mountains to the Asa Wright Nature Center. The amount of flora and fauna was breathtaking. The second trip was a thorough exploration of Port-of-Spain during the day when we were on a break from the fishing. They also coordinated our dining- and on this ethnically diverse island, Art and I sampled gourmet-quality dishes of Indian, Caribbean, and Seafood-Fusion varieties.

I have never tarpon fished in such an exotic habitat. I liked the fact that my driver's name was Rameesh and that his family hailed from northern India. Captain Danny's family is from Corsica and the Pouchet's have a European origin. This diversity is emblematic of Trinidad. With all of the many wonderful tours all over this big island, the shopping and excellent dining to be had, we barely scraped the surface. Clearly, Trinidad is an excellent destination for non-fishing spouses, friends, and family members as well.

Jan Maizler is a veteran writer, author, editor and blogger with over 40 years in the outdoor writing field. He has written eight books and more than 600 articles for all the leading saltwater angling magazines, as well as many prominent websites. He has traveled all over the world and is past International Game Fish Association world record holder for permit on 4-pound line and bonefish on 2-pound line.
END_OF_DOCUMENT_TOKEN_TO_BE_REPLACED