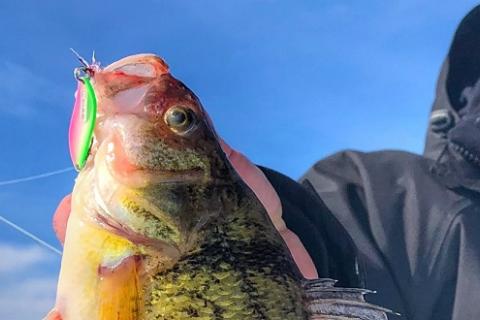 The Infatuation with Big Jumbo Perch 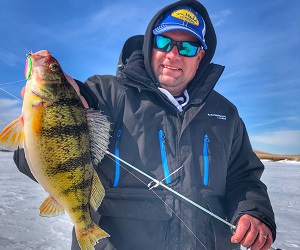 Ice anglers have long been infatuated with big jumbo perch and late ice is a prime window for targeting perch on a lot of different fisheries. In some states, game fish seasons close prior to the late ice period where as perch and other pan fish seasons remain open year-round.

Part of the allure for ice anglers targeting perch can be the highs and lows of perch fishing in that we often need to move and drill holes to find fish. A frustrating day can change in a matter of minutes with one hole…one school of fish. You can go from a zero to a hero quickly when fishing for perch.

What I find amazing about targeting perch through the ice is just how different ecosystems and forage bases can create extremely different patterns. Locations on Mille Lacs Lake will vary greatly from Lake Winnie. Saginaw Bay will be completely different from Devils Lake.

The randomness of where we find perch can be frustrating in that on so many fisheries, we are finding schools of perch wandering basins and large flats. Perch can be anywhere on these locations and are often moving. As a result, finding and catching perch is often about moving and drilling holes. You don’t catch perch until you find them. There are many nuances however that can affect that overall strategy.

Breaking Down Basins and Large Flats

Breaking down basins and large flats is often about making big moves until you find some signs of life and then making small moves to catch fish. A mistake that many anglers make is that they get bogged down with drilling a lot of holes but drilling their holes too close together on foot.

When you are on a large piece of structure, use your ATV, snowmobile or vehicle to make those big moves. Don’t plop on a location, unload all your gear and proceed to tear apart the lake within a hundred yards of you when in search mode unless you are extremely lucky.

My best strategy for finding fish is making big moves, often traveling two to three hundred yards between holes and spending more time in a hole, perhaps ten to fifteen minutes. By spreading your holes and settling into your holes longer, you also give fish a little bit of time to wander underneath you if you are in a productive area. This style allows you to break down bigger pieces of water and allows you to cover miles of water over the course of the day when you are starting from scratch.

Once we zero in on a general area, this is the time to get more aggressive use an ice auger to drill a grid through an area where you can aggressively move from hole to hole and contact fish. This is where the small moves catch fish. Small moves or drilling out a small area is terrible for finding fish on a big lake but is the very best way to produce fish once you find them.

There are many factors to try and wrap your head around when dialing-in patterns but perhaps the most important factor is how to drill out a location and the overall strategy of using your auger to catch fish.

These vertical schools are typically very aggressive fish and these fish will often climb much higher in the water column. There are also times where perch will seldom stack up vertically and instead school up where the fish swim side by side and you seldom have more than three fish on the Vexilar at one time.

These horizontal schooling fish are often less aggressive and sprawl out over a larger area. Generally, if you can get fish to stack up on top of each other and get multiple fish below you… these fish are much easier to catch.

How the fish are schooling can really influence your overall strategy. If you are dealing with perch that are sprawled out over a general area, you can sit over one hole and just wait for these waves of fish to pass underneath. If you get a school of fish to pass by every ten to twenty minutes, you can add them up to a great day. When fish are traveling fast in a column, you often need to be much more aggressive and land on them for short periods of time where your windows are going to be intense. You might only keep these fish under you for ten minutes at a time before you lose them but if you get two or three cracks at these fish in a day, you can tally several fish in a short amount of time.

Better Decisions On the Ice

Understanding some of these factors can help you make much better decisions on the ice when targeting late ice perch. Your process of looking for perch and how to target these fish once you find them in all reality trumps everything else.

What you do with your auger can often be much more important than presentation details. Late ice is perhaps one of the most coveted periods of time for ice anglers targeting perch.

When breaking down large basins and flats that can be somewhat intimidating… big moves find fish but the small moves catch them.

Summer Bluegills in The North

A New Definition of Ice Fishing is “Camping on Ice”

3 Pros Pick the Best Ice Fishing Line for You

Pros4-1Source is a select group of OutdoorsFIRST Media's staff of writers and videographers skilled in hunting and fishing based in Rhinelander, Wisconsin. These talented professionals publish news of the day and live coverage of events in the freshwater sportfishing, hunting , and marine industries.