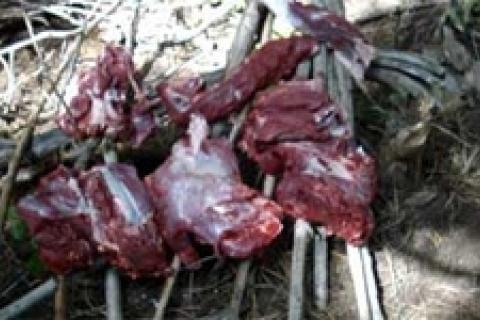 You hear a lot about aging meat but does anyone really understand what it means to age meat? I remember as a youngster reading articles about hunters up north aging their deer for 10 days, and I didn't have a clue about what they were talking about. I'd never heard of aging. In south Texas we had to hurry up and get our deer in the freezer before the afternoon heat hit.

As I've gotten older I've learned a bit about aging but still do not claim to be an authority. I'll share with you the little that I do understand.

First off what is aging? It is basically controlled rotting. When meat is aged it makes the meat more tender.

When you think about it that makes sense. We call "tough" a piece of meat that you have to put extra pressure on while chewing? Next time while cutting meat notice you can tell if it is tough by how hard it is to slice.

In the old days all the good steak houses would hang rib primals (whole segment, ribs 6-12 rib) on a tree. A tree is a metal hanger with hooks on it. They would let it hang for a period of time. This was called dry aging.

You hear how they'd let it hang until it had mold on it. They'd then trim the mold off the end (much as in cheese) and then cut the steaks. This was done in a walk-in type cooler.

There are very few places left in America that actually dry age meat properly like they did in the old days.

To properly dry age meat you're supposed to hold it at a certain temp, humidity and for a certain time period. It was not aged in a bag like a lot of beef currently is. Not many people have that capability, much less us hunters. Now I bet over 99 percent of the meat is aged in a Cryovac bag. If you've been to a supermarket and seen a primal displayed in a bag that's what a Cryovac bag is.

What does that mean? If it's aged in a bag, that changes the total environment of the meat. A whole different culture of bacteria is present. The bag creates an anaerobic condition (lack of oxygen) so of course a different flora of bacteria grows. So compared to beef that is hung in the open (aerobic-oxygen is present) it will age differently.

There are different kinds of bacteria. Pathogens are bacteria that make you sick or kill you. There are also good bacteria that don't hurt you (i.e. ones added to make yogurt).

Many years ago I worked for a company that was experimenting to obtain a shelf life of 100 days in a Cryovac bag. The Australians said they could do it so of course we had to. It looked fine and I ate plenty of it, but somewhere it reaches a point that you're eating more bacteria than you are meat!!

So how does this all fit into the hunting scene? Aging can be a touchy subject so let's make some disclaimers right off. You can get by with aging beef longer for a couple of reasons:

When you age your game it's usually in your garage. It'd be best if you could keep it at 32-36 degrees. (Meat officially freezes at 28 degrees.) Equally important will be how clean your carcass is. If it has hair/dirt on it there will be a high load of bacteria present.

The dirtier it is, the less time you have to age. At a bare minimum you want to at least let it go through rigor mortis before you bone it though. If it is boned out before going through RM it will be a lot tougher. Think about it – it is going to shrink up anyway but if it is still tied to the bone it can only shrink so much. If you bone it hot it will shrink up twice as much. In the backcountry sometimes you don't always have a choice but given the opportunity, let it hang at least one day. Or if you can just quarter it out so it is still attached to the bone, that would be the next best option.

Use to, and I assume they still do, all the little custom slaughterhouses aged your beef 10-14 days. You'll find out that it's a lot different aging deer/beef on the bone and in the open environment than it is to age beef in a Cryovac bag.

One good thing is that in most cases bacteria will have visible indicators (NOT ALL WILL THOUGH). If it starts to get a slight off odor or turns a slight off color, don't panic, just cut it up and freeze it. Now to scare you further, Staphylococcus produces spores. Even if you cook the meat and kill the bacteria, the spores are heat liable (heat cannot hurt them). It will make you sick. So on staph, it doesn't do any good to just check for staph counts, you must check for the presence of spores.

I know it sounds complicated. That's because it is. So how have people survived? Because sometimes we worry way too much. I remember my nutrition professor from South Dakota said when they had a horse die they'd tell the Indians. They'd always wait three days to come get it. They lived. It's just that I am giving you rules of thumb to go by.

One of my past bosses would age his Cryovaced beef ribeyes in the fridge for at least 6-8 weeks. Anymore I won't even cut up a ribeye unless I've aged it for a minimum of 45 days. I've even had them up to 90 days old. Now bear in mind that was beef in a Cryovac bag in a cold fridge. But some cuts will not age as long – tenderloins, rounds, ball-tips, etc. I attribute this to the fact that they begin with a higher bacteria load.

One last note: Don't age your meat loose in the fridge. It will pick up odors.

Here's what I would recommend for you to do: Don't jump in with both feet. Start off cautiously. Age a few days more than you normally do and progress on from there. Now there's no doubt that I'll hear from both extremes. One camp will tell me they got sick once off some venison that was two days old and another will tell me how they buried goose eggs in the sand in Vietnam for 40 days. I was on a radio show once talking about this subject and the host  told me he had a buddy that only cleans his birds one day a week. They'd set and age the other six.

Hopefully I've sparked your interest to experiment with aging your meat. It will surprise you as to how much tenderer it is. Let's end on a quote from Ben Franklin: "After three days fish and company both start to stink"! Don't age fish.

Five things make your meat tenderer. Letting it go through rigor mortis before boning, let it age, young animals are more tender, use tenderizers before cooking, and cook your meat slower.

As we've said, there are different criteria if you're hanging your deer carcass or if you've boned it out and are letting it age.

Tagged under
How To Guide
Read 8,247 times

Gar Fishing With a Nylon Rope

A Look at the Most Popular Knives and Their Uses

Butchering Breakdown – How to Cut Up Your Deer (video)

Build Your Own Walk-In Cooler

When not writing for Bass Pro 1Source, Tom Claycomb has a column in the magazine Hunt Alaska, writes for Havalon Knives, and has outdoor columns in newspapers in Alaska, Oregon, Idaho, Utah, Nevada, Colorado and Louisiana. He does freelance writing for numerous other magazines and newspapers; writes for, LIMB Saver, Bowhunter.net, Bowhunter.com and Western Whitetail Hunter.